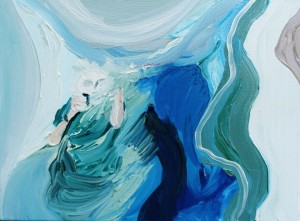 JE EST UN AUTRE (“I is someone else”). Arthur Rimbaud

There is nothing much I can say about myself. And no biographical element is truly relevant to oneself anyway. It’s the story of another guy that people identify as “me”. We let them do so because doing more is  tiring and doing less would be pointless.

Let’s just say that I was born in 1960, near Paris, France. “Contempory art” was born before me but true painting was not dead yet. Yves Klein just got famous by taking pictures of naked girls rolling their body in blue paint. Boris Vian had died nine months before my birth, in a movie theater. No link with my parents, eventhough I like to think I was conceived at the same moment. Nothing much has happened since. Just life, but all of it, I guess. I’m writing but do not consider myself as a writer. I’m painting but I don’t consider myself as a painter. I am elsewhere.

Jean Genet had a kind of satori one day in a train. He was sitting in front of a man, probably a commercial traveler. This man was looking… like nothing. He was ugly, like most people, dirty, like most people, wore ordinary clothes, was in his mid-fifties. He would not be remembered by anyone. But Genet felt all of a sudden that he was this man. Nothing special, if you dig at the root of the human condition, was making any difference between this man, himself, or any other man in that train.

Genet got rid of much of his ego that day, and changed for ever his behavior and his way of looking.

Do we know a man better by reading his books, admiring his paintings? I don’t think so. Art is a creation, by the artist, for sure, but very much by art itself too, like cooking. How could I put it ? It’s not about painting nice pictures, it’s about exploring the mystery of our own night. I know, it sounds pretentious, but that’s what art has been about for a while.

So, my friend, read my texts if you have a chance to find them, look at my paintings if you wish, they won’t tell you much about me, and that’s fine. As my dear Bukowski used to say: “Don’t try”.